Changes in the repository

1) Change the SCM tag of your pom file to use SSL.

2) Make sure to set the correct distributionManagement for your project:

It cannot have a 'pushChanges=false', and the tag name format should be set to the OpenMRS standard.

4) If you want to use the version of modules and dependencies defined in the refapp distro pom:

4.2) Delete all the other dependencies in DependencyManagement already defined.

For each dependency of your omod and api that belongs to the distro, make sure it's provided or test scoped.

Keep the properties used to generate the config.xml file for your omod.

Generate a dependency tree of both versions (before the changes and after), and make sure the scope and the dependencies are correct. If it changed, try to identify what caused it.

Do a mvn package and confirm that inside omod/target/your module-1.0-SNAPSHOT/lib/ it's only shipping what it should include. If not, find the dependency added and change its scope to provided or test.

4.4) Make sure to update the register of modules using it.

(temporarily it's in openmrs-contrib-bamboo repo)

Creating a new build with a release stage:

When selecting the plan, Actions/Configure plan. Make sure to click in the plan level again in the configuration mode.

Add a link to the Releasing a Module from Bamboo page in the plan config. For example, 'More details of the release in https://wiki.openmrs.org/x/i4DTAw'

Change it to point to your repository.

Make sure you are using the correct java version in both the first stage and the release stage (controlled by the JAVA_HOME variable): 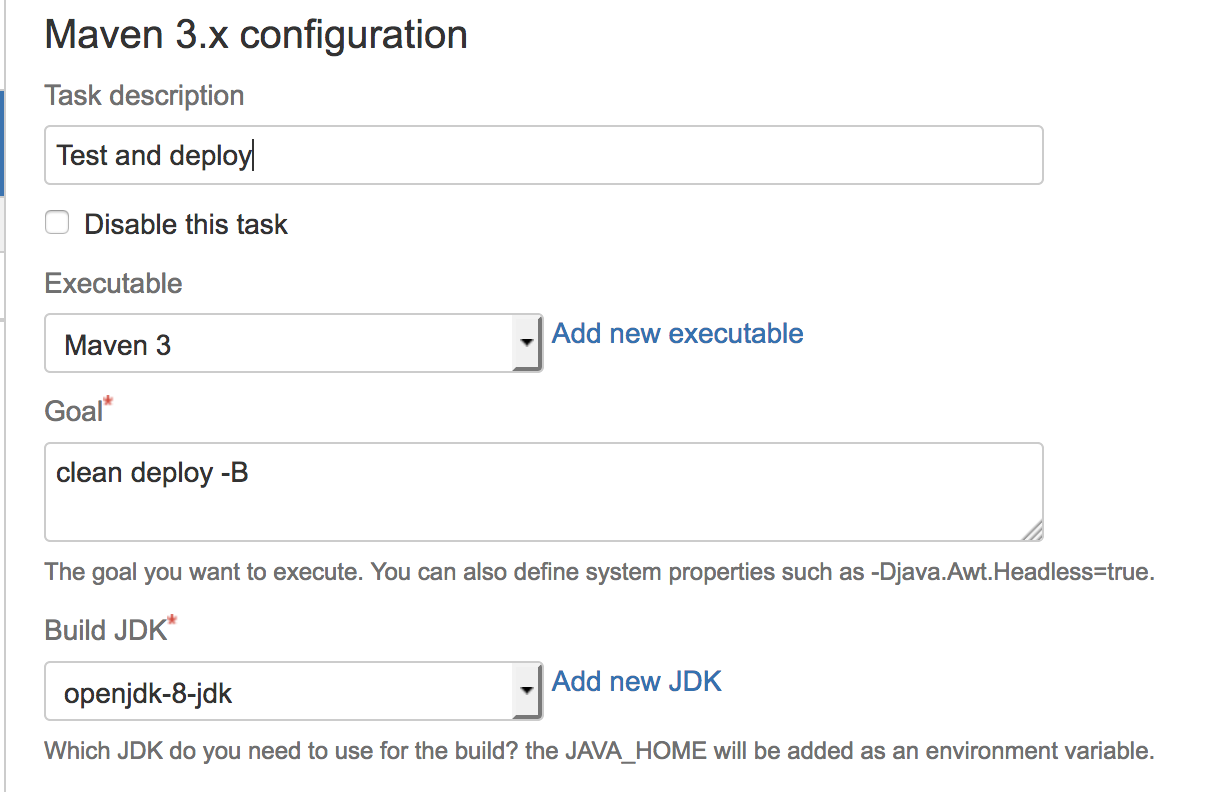 To run in JDK 7, you can just remove the JAVA_HOME variable in the release prepare/perform task (or use JAVA_HOME=${bamboo.capability.system.jdk.openjdk-7-jdk}).

If your build is going to trigger other plans, make sure to add to its dependencies.

2.6) Handle Test cases during the build

If your module doesn't have any test cases, then Goto Configuration → Tasks → Maven 3 X. Then clear the selection of the "The build will produce test results". Otherwise you might get the build failures.

If your module is not part of the refapp distro, make sure to delete the relevant tasks in the 'Release to maven' job of your build:

Creating a manual stage for a build that already exists:

Make sure to add your module to Releasing a New Version of a Module.

If you do not have access to bamboo, ask OpenMRS Help Desk.