This story grew out of years of watching Clem McDonald in action, famously productive, while others seemed to spin their wheels. It is much the same message as the Cathedral and the Bazaar.

Clem and another group are faced with the same challenge: build a bridge across a canyon.

The other group — like most of us would — gathers engineers, draws up specifications, and begins planning on how the bridge should be constructed properly.  Meanwhile, Clem pulls a box of dental floss out of his pocket, unwinds it, and throws it across the canyon. Almost immediately, he's got something across the canyon. It's only floss, but it's there — end to end. The other group is arguing about whether the bridge should be a beam, suspension, truss, or arch bridge.  Clem starts layering paper mâché onto the floss. The other group has finally decided on a suspension bridge and begins preparing the materials according to specifications.  Clem has people walking across his paper mâché bridge. The other group realizes that they would probably be better off with a truss bridge, begins discussions on the new specifications, and then realizes that they are too far over budget and the project is shut down.  Clem has people driving across his bridge. The other group finally creates their version of the bridge, only to realize it doesn't reach over to the other side where they initially intended it to! 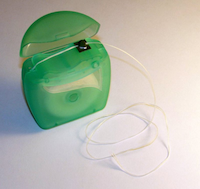 Be agile, open to corrections, and iterate on your solutions. But, most importantly, take action.