Improvements to the HL7Query Module

This document contains a detailed overview of improvements to be added to the OpenMRS HL7Query module during the GSOC 2013 program.

The core objective of this project is to add new features which will ensure the transition of the OpenMRS HL7Query module from merely responding to user requests to an underlying service which listens to certain events, and generates pre-defined HL7 messages in response. The HL7 message generation feature already works as desired, we merely want to change the manner in which it is being used to generate responses.

The initial version of the HL7Query module behaved in a synchronous 'ask and receive' fashion. Users defined their own HL7 message structures, and then made specific requests to the module. The module created appropriate HL7 messages based on these requests, and returned them to the user.

However, based on later discussions, it seems that some users are not interested in a query feature as we developed.

Therefore, i'm proposing the following improvements to this module,

The Key use case I have in mind for GSOC is tied to improving the HL7Query module so that it can be linked together with the OpenMRS event module and the NDC module to function jointly as a surveillance tool.

The OpenMRS event module listens to particular events, and reports them. The HL7Query module identifies these events, and translates them into HL7 messages, which are then sent to the NCD module. The NCD module can interpret the received message, use it to identify a specific medical condition, and act accordingly.

I [Suranga Kasthurirathne] will list down the  following steps / guidelines as a means of documenting my thoughts on how to build this feature.

Currently, the OpenMRS event module allows users to register for certain events (create / update etc.). My plan is to re-use this feature.

OpenMRS users may have created a number of events to listen for using the OpenMRS event module. The HL7Query module will contain a web page which will list each of these event types. Users can select one or many of these events, which they want to process using HL7 messaging.

(Step 02) If a user selected to 'follow' an event using the HL7Query module, we will offer him a number of options on how to process the results.

The above indicated that we should create a model object to represent a SenderProfile object, which will contain these data. Each of the events which we elect to follow must be assigned one (and only one) Sender Profile. The Sender profile will define what we intend to do with the hl7 message.

Based on the above, I feel that we need to add two different web pages into the module.

However, this doesn't mean that we are doing away with the existing features. The query facility will still remain, and be fully supported.

Instead of continuing to call the module HL7Query, we need to change it to something which indicates its new features. How about 'HL7Messaging module' ?

The first thought to come to mind is the OpenMRS Events module, but we're open to alternative suggestions

Build the interfaces/ features which allow users to specify where to send the HL7 messages. This will include storing urls, ports, message structure preferred as well as user name / password management.

The following mock-ups provide an overview of expected page design and features, 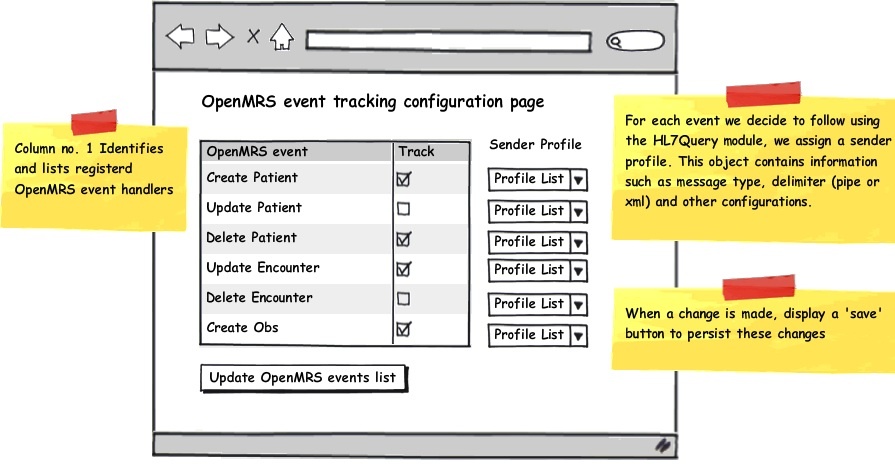 Image B: The creation of sender profiles used to manage message processing data 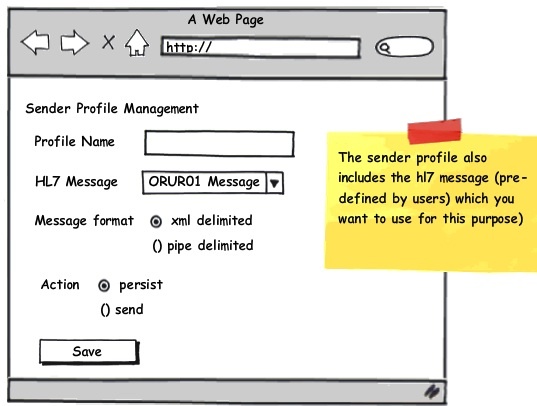 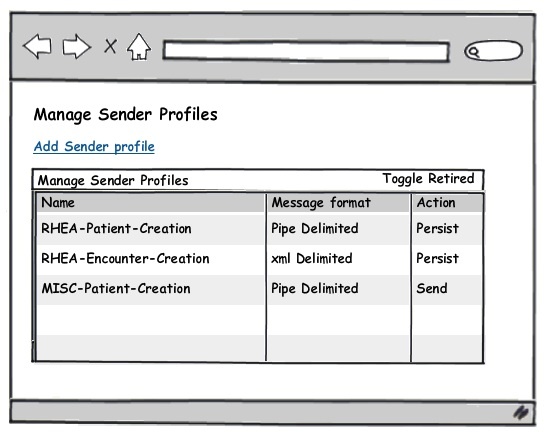 Once these features have been implemented and tested, we may also work on adding out of the box support for ADTA08 messages.

***HL7 noobs can stop worrying, I can assure you that writing an ADT message will be no harder than writing xml or Json. You have the easy job. We (the experts) will have the far more difficult job of agreeing on the structure of the message we want you to write ***