10-Min Overview of Our QA Framework

In addition to the clear guidance below, you can see this recording for a tutorial we hosted on setting up Selenium tests for the Reference Application: https://iu.mediaspace.kaltura.com/media/Design+Meeting/1_dh12nkr0?st=321

A demo on how automated tests are carried out can be accessed at https://www.youtube.com/watch?v=XzBAXMj1UN0

A demo for Workflow Based Testing using BDD framework: https://www.youtube.com/watch?v=Wl_KHd11Hyo

In order to test within a real desktop browser, you will need a webdriver to connect to your browser (either firefox or chrome).

How to test different projects

How to run locally tests for  2.x Reference Application

How to run locally tests for  3.x Reference Application

How to run locally tests for  Dictionary Manager

No results were found for groups : CTGCHG 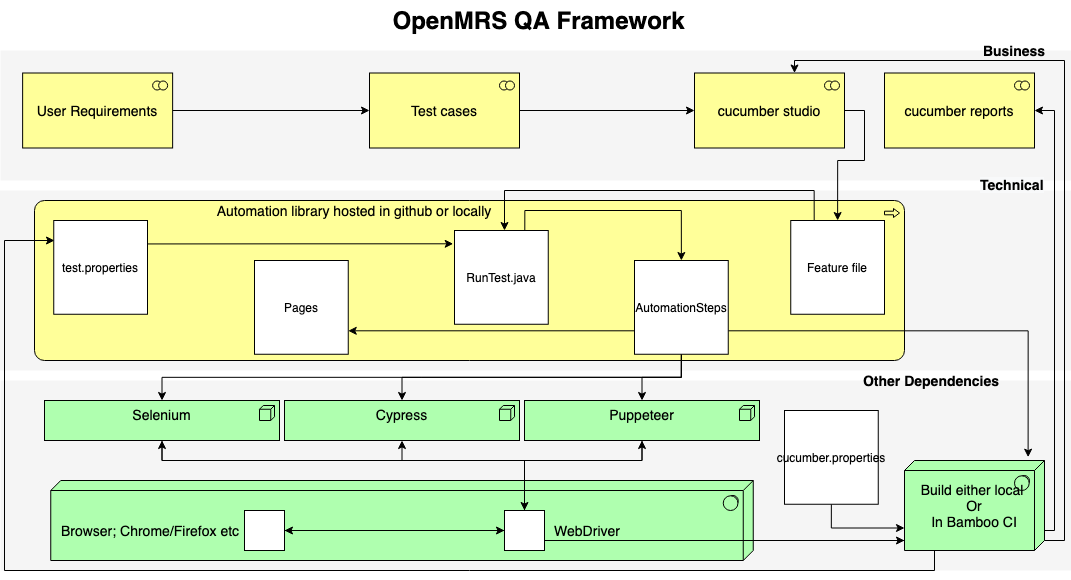 Collaboratively, business analysts translate requirements into test cases and define from them features, scenarios, steps written in a Behavior Driven Development (BDD) approach through a human readable language; Gherkin, this is made easier graphically through cucumber studio.

Exporting the project from cucumber studio for automation avails a feature file with the human readable test case which file can be written from any texteditor and which is imported into the automation library (qaframework) and an automation layer (with step descriptions) is written by a test engineer or developer through a preferred automation framework such as selenium (for the reference application), cypress (OCL) etc.

Running the QA framework locally or in Bamboo CI runs the automated test suite;
- this will read test.properties and launch RunTest.java(junit with cucumber runner) with the loaded configurations which reads all feature files tagged @run and locates each respective step description from mapped (glued) automation package,
- automation steps launch the automation framework (e.g selenium/cypress) by scenario and each scenarios by step order, steps load pages (some are from uitestframework/distribution/qaframework) and return results to the build through its web driver
- the build posts test results to reports.cucumber.io if configured to in cucumber.properties which happens by default within bamboo CI
- Bamboo CI is also configured to post results back into cucumber studio and a result green/red label (build status) is displayed on qaframework basing on CI build result.

Below is a sample tutorial to help ease understanding the structure of feature files, page and step definitions

A feature file is written in a human readable gherkin BDD language, cucumber runs the feature files in their naming alphabetical order.

A simple feature file consists of the following keywords/parts −

An implementation of the actual functionality of each step within the feature file consuming the page to emulate a complete user system workflow. Each Step class contains all the scenario steps for the respective feature file

Guidelines of Writing/Extending  Each Test classes

Find some work on the QA board at:

Sometimes your added web driver may not be executable if you are running the IDE vs maven which auto makes that so when building. ensure you always manually make it executable to avoid the server quitting before launching.