This documentation is intended to enable administrators, implementers, and developers to set up and configure an OpenMRS Frontend 3.0 application. If you haven't read the Project Overview yet, do that first.

Developers: Once you've followed the steps in this Implementer Guide, you can also see the Developer Guide for more guidance on building with the 3.x tooling.

Notes for developers only are in Info boxes like this. Non-developers do not need to worry about this information.

There are four important pieces of the OpenMRS frontend modules system:

Each frontend module is an NPM package with a name ending in -app.

A visual map of building a 3.x application is described in more detail in the Dev Guide's Map of the Project. 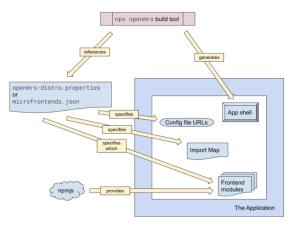 Looking for a repo?

See the Dev Guide's Repositories You Should Know.

Deploying Frontend 3.0 with a server distribution

This kind of application is served using the OpenMRS SPA Module. The module that serves the application from the frontend/  directory within the server directory.

Frontend modules should be specified in the distro.properties file in the following format:

<version> can be any version number or any tag published for that package in npmjs.

These are described in the frontend tool help documentation. Execute

to read more about them.

Deploying Frontend 3.0 independently of the server

An OpenMRS Frontend 3.0 application is built using the frontend tooling, npx openmrs. This is the same tooling as used by the SDK, described above. The resulting files can be served from any file server, or from the OpenMRS server itself.

The following command will build the app shell. This includes the framework, as well as the index.html file which will serve as the entrypoint to your application.

Remember that many commands will provide helpful information when run with the --help flag. The various features of npx openmrs offer command line flags that you can use to get the application set up according to your needs. Try the following command, for example:

At this point we still need an import map and the frontend modules. There are two options for going forward.

Serving the whole application from the same place

In most cases, we will want to package the whole application and serve it together. We can assemble an import map and frontend modules using the following command:

At this point, you should have an application that you can serve.

Serving frontend modules from a CDN

In some cases, you may want to have your import map refer to frontend modules that are located elsewhere, such as in a CDN server. In this case, you will need to assemble your import map manually. Run npx openmrs assemble so that you have an idea of what the import map should generally look like. The entries of your import map, however, will have values that refer to remote places where the package is served. An example line might be

Note that you should not use unpkg as your CDN; it is a free service which provides no uptime or support guarantees.

Install the SPA module as you'd install any other module. Then drop your OpenMRS Frontend 3.0 application files into the frontend subdirectory of the OpenMRS server's application data directory. So on an SDK server called "narnia" on a *nix computer, you would put the files in  ~/openmrs/narnia/frontend/ . On a Tomcat server, the files would go in  ~tomcat7/.OpenMRS/frontend/  . If you then start this server on port 8080 and navigate to http://localhost:8080/openmrs/spa/login , the SPA Module will attempt to serve the file at  frontend/index.html . The "login" part of the path doesn't matter—in a SPA like OpenMRS Frontend 3.0, the  index.html  file is always served, and handling the specific route is left to the application itself.

To create an example distribution using the OpenMRS 3.0 SPA as frontend you'll need to think of three things:

The parts of (2) and (3) also flow in directly or indirectly into the settings defined for (1).

Using this command you'll build a new app shell that will be placed at /openmrs/spa/. The OpenMRS API is supposed to be on the same server (at least reachable from the browser) at /openmrs/ (e.g., a call to /openmrs/ws/rest/v1/session yields the session, so /ws is rooted at /openmrs).

The command above also defines two more things: The frontend modules from (3) are determined by an importmap.json which will be available in the same directory as the SPA (i.e., reachable at /openmrs/spa/ from the browser). Likewise, a configuration file is specified; the file config.json will be loaded from the SPA's path, too.

Now that you'll have your files for the app shell its time to look at how to get the remaining ones.

The frontend modules from (2) can be assembled using:

This will run a command-line survey iterating over all (publicly) available frontend modules. If included, the survey will ask you what version to take.

Once completed, you'll have a valid importmap.json as well as a directory with all files corresponding to the different frontend modules referenced in this importmap.json.

Finally, you'll also need a configuration. Ideally, you can just write some JSON that represents such a configuration, however, in the real world this will not be so easy.

Our recommended approach is to actually start with an empty JSON file just containing {}. With this empty configuration you can fire up your application shell and actually set it all up as you want to. The frontend module @openmrs/esm-implementer-tools-app will help you to do exactly that.

When you completed your customization in the frontend you can download your individual config.json. Now you can put it besides all the other files to complete your own distribution.

What does an OpenMRS frontend configuration file look like?

Alternatively you can provide your config file as a JavaScript file. It will look just about the same, but with some magic words at the beginning:

How do I configure my OpenMRS implementation?

You can pass  --config-url  parameters to the build tool  npx openmrs build.

The following command will build an application that looks for config files at the URLs  /openmrs/spa/abc/config.json  and  https://example.com/config.json :

Config files will be merged, with values from subsequent files overriding those coming previously. For example, if  abc/config.json  has contents

Then the login page will display the logo given by the first config and the alt text given by the second config.

In this way, you can break up your configuration files into hierarchies, per module, per groups of modules, or however else you please.