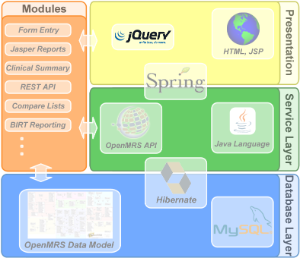 OpenMRS has a modular architecture, meaning that "modules" (i.e., add-ons or extensions) can be added to the system to add new behavior or alter existing behavior. OpenMRS Add-ons index hosts publicly downloadable modules; these can be installed directly from within OpenMRS as well.  See the Module documentation for developers.  Modules are allowed to interact with OpenMRS on every level.  They can provide new entries into the Spring Application Context, new database tables, new web pages, and even modify current service layer methods.

DWR is largely being replaced with REST Web Services as of 1.9+.

(but its already done in the header for you as of version 1.7+)