Synchronization is needed when you have multiple sites using OpenMRS with separate databases and you want them to copy data to each other. In this situation, one site has to act as the "Parent", and one acts as the "Child". The Parent is always the computer or site that is most central. Multiple child sites send their data up to the parent site for dissemination. Children/parent sites can be set up in a multi hierarchy way. (eg. a parent server can have a parent server). The parent/child servers can be connected by a network continuously, connected occasionally, or not connected at all.

The Sync Module works by keeping track of all changes going through the API into the database. These changes are then replayed on the other server(s). The changes are stripped of all primary key references. Instead, UUIDs are used to compare and reference other data. Because of this, the parent/child servers must be exact duplicates when sync is first started.

This module uses code from the Data Synchronization Project and should be installed on OpenMRS v1.8.3 or greater. 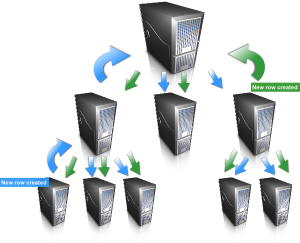 Updating The Sync Module to a New Version

The sync module is a Mandatory Module and cannot be stopped or unloaded without stopping OpenMRS. This prevents any data loss for connected parent/child servers from occurring. However, it means that there is no way to remove the module to install a new one in the traditional fashion.

The sync module is a Mandatory Module and cannot be stopped or unloaded without stopping OpenMRS. This prevents any data loss for connected parent/child servers from occurring. However, it means that there is no way to delete or uninstall the module from the web interface.

To clean up the database, these statements need to be executed. Be careful as you are also deleting all the sync history and can't resume your work with the Sync Module later on.

Additionally you should stop and remove the Scheduled Tasks "Cleanup Old Sync Records" and "master Data Synchronization" (if the automatic sync via web is configured).

When upgrading OpenMRS, occasionally data is modified that is key to sync (a uuid column). This is done outside the API, so care must be taken to update the child sites correctly.

This is the general process you should follow whenever upgrading openmrs

Once the sync module is installed, all database updates should be done through the openmrs api. Direct sql on the database should not be used because those changes will not cascade to the parent/child servers.

Instead use the groovy module to make calls on the OpenMRS API to change the database.

The initial version of the sync module provides no means for conflict handling or resolution: it simply operates on a last-in-wins model. The assumption is that patient-level conflicts are rare in practical use, and therefore conflict handling is not a "must-have" feature for a version 1.0 of the system. It is recommended that the Sync module, as currently designed, NOT be used in situations where frequent conflicts are expected (aka concurrent patient editing).

It is strongly recommended that you don't depend on sync to propagate changes to your infopath forms.

Infopath XSNs are .cab files that contain a whole bunch of files inside of them.  Some of these files have the hard-coded paths of the server that one was working on when modifying the form.  The problem is that these hard-coded strings then get propagated to the other servers through sync (when it's working).   In the past, we've seen forms from one site being submitted to another site, which caused all kinds of problems.

It is recommended to block synchronization of org.openmrs.module.formentry, and do all XSN manipulation by hand on each server.

These objects are supported in Sync Module Beta 2 + and with OpenMRS v1.5.3+, v.1.6.2+, and 1.7+. Any other version and you will have to "ignore" the class "org.openmrs.notification.AlertRecipient" from both sending and receiving in order to avoid errors.

Compatibility with other Modules

If using the Formentry Module 5.x and below with the Sync Module you must take care with how the concepts are developed. Formentry still depends on internal concept.concept_id values being the same on all servers. The sync module cannot guarantee that to be the case. So all concept/form development must happen on one and only one server in your sync network.

History of the Sync Project

The sync project was the brain child of Christian Allen in 2007 while he was working for Partner's in Health. PIH had multiple sites that were not continuously connected by internet across the Rwandan countryside. Transporting paper forms 4-5 hours on a daily or even weekly basis was not working. His vision of a bidirectional asynchronous database synchronization technique lived and developed in a branch or two for several years. In mid 2009 it was clear that sync was not going to be a part of core code going forward. We made changes to core that were incorporated into the OpenMRS 1.5 release to enable sync to be a module. We then ported the code from the branch into the sync module to allow for maximum flexibility and ease of use.