We need to separate "application roles" (used to assign privileges to users) from "organizational roles" (which reflect real-world job titles), because these two are not always aligned.  In simple cases, these two types of roles can be combined or confused; however, as an enterprise grows, exceptions arise.  Put simply: separating roles between the application (used for privileging) and roles within the "real world" means that all users sharing the same job title do not have to share the same privileges in OpenMRS.

There wouldn't be a problem if OpenMRS roles were only used for authentication (checking privileges); however, it's common for people to start building assumptions that the application roles represent organizational roles.

All of these issues arise from conflating the notion of organizational roles with the (application) roles within the authentication system of OpenMRS... and they can all be solved by separating these two ideas. As soon as reports, modules, workflows, etc. start making the assumption that someone with a DOCTOR role in the system is actually a doctor (as their organizational role), they are conflating the two ideas – (1) this person needs to have DOCTOR level privileges within the system and (2) this person is a doctor – which, in practice, do not always align.

If you want the authentication system (what are supposed to be application roles/privileges) to be used also for organization roles, then you create organization roles separately and don't use them for privilege assignment. For example:

To make it easier to assign these roles together, you could add grouping roles:

Ultimately, OpenMRS would have a separate mechanism for recording organizational roles (job titles) outside of the privileges mechanism – creating a new user with a job title would suggest associated application roles. 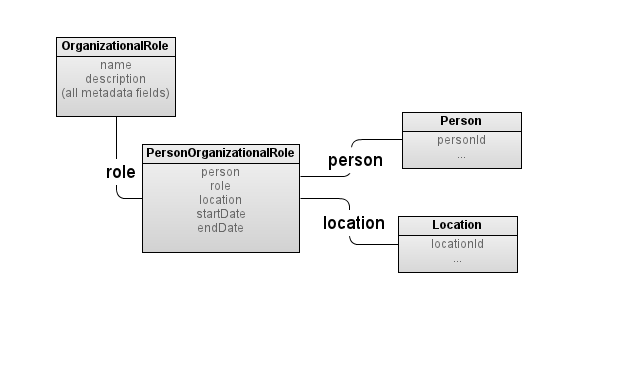 The data model diagram for the Provider Management module be found here.  It would be great if we could take this into account when coming up with the final core design.

Do we only attach OrganizationalRole to Person? Or do we also attach it to Provider? 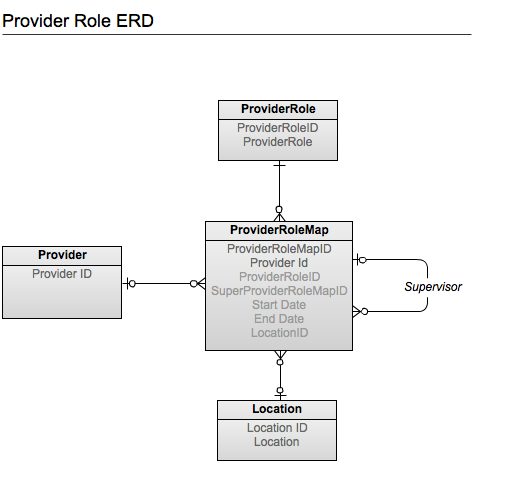