A concept datatype prescribes the structured format by which you desire the data to be represented. In simple terms, the datatype defines the type of data that the concept is intended to collect.

The standard datatype for any non-query-like concepts, e.g. symptoms, diagnoses, findings, anatomy, misc, etc. Any concept which does not itself collect data. 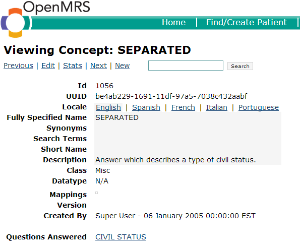 Structured response including both the date and the time

checkbox response, e.g. yes or no queries (starting from OpenMRS v1.7, you can modify existing concept with boolean datatype to coded answers).

Best-practice for implementing OpenMRS is to never use the Boolean datatype. Any time you are thinking of creating a Boolean concept, you should create a Coded one instead, with "Yes" and "No" as answers.

Boolean answers (simple "Yes" or "No") are very often insufficient. In most cases, you also want to be able to record at least one other option ("Unknown") to distinguish between "left unchecked on purpose" and "not addressed." As an example of the importance of handling missing information properly, ﻿HL7 defines 9 different flavors of missing information. By creating your concept with the Coded datatype in the first place, it will be trivial for you to add other possible answers later, if (when) someone asks you to.

Complex numeric values possible (ie, <5, 1-10, etc.) This has not been implemented yet.