This module extends Encounter records in a way that allows recording of inpatient care (i.e. encounters with a time interval rather than a discrete date), as well as a hierarchy of 'parent' and 'child' encounters. A 'parent' encounter expresses the overall duration of inpatient care, while 'child' encounters represent interactions that take place during the patient's stay (e.g. physician visitations or procedures performed by a nurse). At the end, a discharge letter can be generated as a PDF file.

It also uses the location hierarchy of OpenMRS to support sub-sections of a hospital (i.e. departments, specialties and rooms). Figure 1 shows the hierarchy used in this module. In addition, rooms can have an optional bed capacity (i.e. to indicate hospital bedrooms in contrast to other room types). 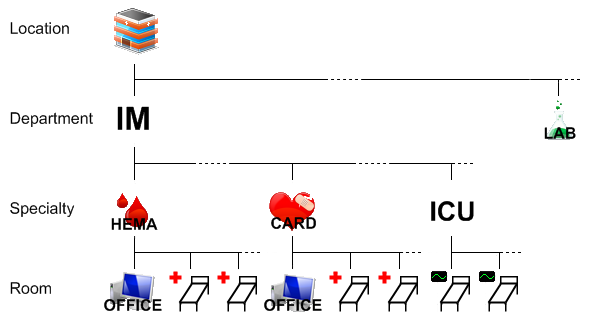 The location of the recorded encounter can be an entity from any hierarchy level (hospital through room).

Finally, the module adds rudimentary functions for filtering patient record access based on the user's home locations. A user can be put into a 'location-restricted' mode and assigned at least one home location. He will then only be able to access patients who have ever had at least one encounter at that location (or any of its child locations).