What is an OWA?

This section features an overview of when OWAs can be used in OpenMRS development.

Open Web Apps (OWAs) are similar to standard websites, but are packaged apps that are contained in a zip file.  They can be accessed online but can also be installed and downloaded to a device to work offline. OWAs can also access APIs, mainly the OpenMRS REST API, that allow the device to use features like a calendar or camera offline, compared to some websites that do not allow this access.

Currently, the new OWAs for OpenMRS should be written in React. OWAs that are written in Angular should be organized into components to help facilitate the migration to the most recent version of Angular.

To learn more about Angular, React, and jQuery, go to https://radar.openmrs.org. 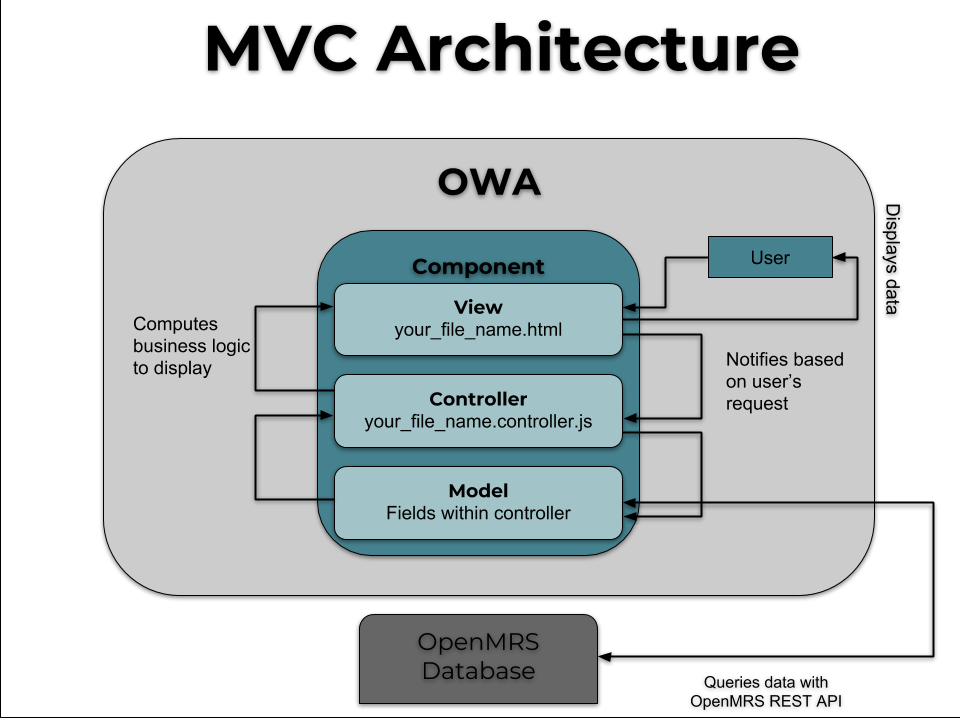 This section features dependencies needed to install and work on an OWA along with languages commonly used.

These tools are recommended for the development environment.

How to write an OWA

Link to see how to install and create an OWA: https://wiki.openmrs.org/display/docs/Open+Web+App+Development+Workflow#OpenWebAppDevelopmentWorkflow-2.InstalltheOpenWebAppsmodule

Once the OWA has been installed, various files will be included and there will be some dependencies used for the OWA. Each OWA follows a typical structure inside the app folder. There is a CSS folder that holds all of the information for the OWA that pertains to CSS and styling. Another folder called JS holds information regarding Javascript and the functions utilized. This folder will also have areas to separate the components related to the OWA. The img folder contains any images that the OWA is connected to, and the manifest.webapp has the information and configuration details about the OWA. Finally, the index.html document is used as a container to house and display the various HTML components of the page.

The purpose of Obsadmin OpenMRS Open Web App is for a Data Manager who might want to clean up a patient’s data. This will allow a Data Manager to go in a fix incorrectly recorded data. All of the code for the OWA can be found in the GitHub repository for the project, and the repository includes instructions to download, install, and test the OWA.

The purpose of this OpenMRS OWA is providing a single place to add, edit, manage, and view concepts within OpenMRS. It is built using Angular, and can be deployed using NPM. All of the code for the OWA can be found in the GitHub repository for the project, and the repository includes instructions to download, install, and test the OWA.