Within OpenMRS, a complex observation (complex obs) may contain any arbitrary value. It may be a short string or it may be a giant digital video. In most cases, the complex observation's value is something that isn't easily stored in one of the basic datatypes (i.e., concept code, date, number, or string). It's easiest to imagine a complex obs as a document or an image. The job of a complex obs handler is to encapsulate the knowledge of how to store, retrieve, and render the complex value. Each type of complex obs (whether it's an image, a document, a video, or something else) has a corresponding handler that knows how to "handle" it. The purpose of this abstraction is to allow the API to work with these observations very much like any other observation without having to know how to handle any arbitrary datatype that might come along.

The complex obs value is managed through two properties on the obs with very similar names that can be confusing:

The API itself doesn't control what goes into either of these properties; rather, it defers to the complex obs handler to set these values. The handler takes a payload (obs.complexValue), stores it however it pleases, and then sets a reference (obs.valueComplex) that it can use to find the payload again when needed. When a complex obs is being fetched, the API hands the obs to the complex obs handler and the reference (obs.valueComplex) is used to find and populate the payload (obs.complexValue).

Here are some sequence diagrams to demonstrate the steps involved in getting and setting complex values: 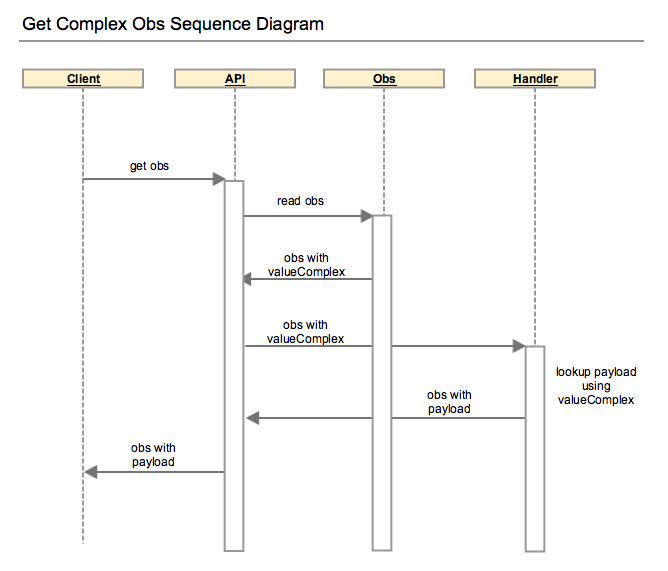 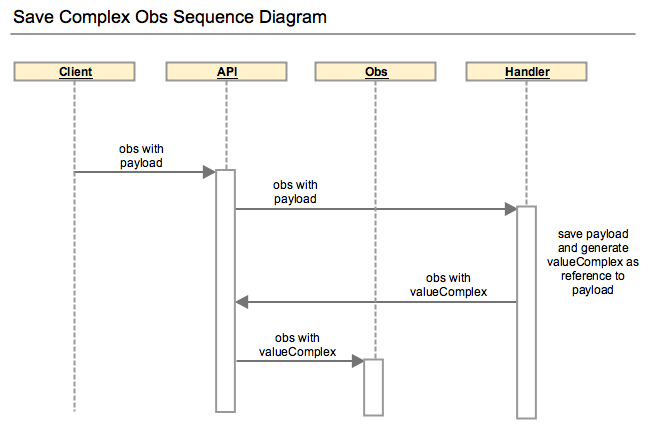 This design allows for almost any type of complex value to be added to the system, since all the actual management of the new type is done within the handler, which can be plugged into the system via modules. An image handler might store the images in the database or the file system. A video handler might use an external server to store the videos.

Let's say we want to introduce a new complex observation to support a "Whirligig" datatype.   In other words, we want to be able to store "Whirligigs" in the patient's medical record as observations.

We create a module to add the capability for OpenMRS to store Whirligigs as observations.  The module contains a reference to our WhirligigHandler in its ModuleApplicationContext.xml configuration, which is used by OpenMRS as the module is started.

We create a concept for "Whirligig", setting it's datatype to complex and specifying our WhirligigHandler as the handler for that concept.

Now that you have a handler to manage Whirligigs and at least one concept in the system that is "answered" with a Whirligig, you can start using them.  In practice, there are three key perspectives to consider: the client, the API, and the handler.